Almac raises £9,000 for ovarian cancer charity in memory of employee

Almac raises £9,000 for ovarian cancer charity in memory of employee

Almac has raised more than £9,000 for Angels of Hope, an ovarian cancer charity set up in memory of an employee who died from the condition.

Angels of Hope was established in 2003 by Portadown women Maureen Clarke, after the death of her daughter Julie Clarke, at the age of just 27 in October 2002. Julie worked in Almac’s Clinical Services business unit based in Craigavon.

The money was raised through a raffle organised by the company, with prizes donated by local businesses, clients and suppliers. They included business class return tickets to New York, luxury hotel breaks and tickets for concerts and sporting events as well as iPads and LED televisions.

Elaine Gibson, Almac’s Global Travel and Events Manager, organised the raffle and commented on the total:  “We’re delighted that we’ve been able to raise so much money for Angels of Hope to support the charity’s work in raising awareness of ovarian cancer and funding research into the disease.

“Staff at our Craigavon headquarters were very keen to help raise funds in Julie’s memory and as Almac is currently carrying out important research into ovarian cancer, as a company we know that awareness and early detection of the disease is vital in order to try to identify appropriate treatment and increase survival rates.” 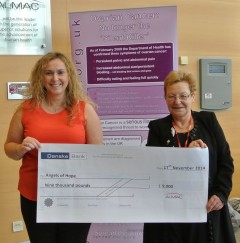 Earlier this year it was announced that a test devised by scientists at Almac to identify which ovarian cancer patients will react best to chemotherapy is a step closer to being used by doctors after being validated.

Maureen Clarke, from Angels of Hope, said: “Julie’s positive attitude and bravery throughout her illness both amazed and inspired me and it was her intention, when she recovered, to make more women aware of ovarian cancer, but sadly this was not to be. In keeping with her wishes, in May 2003, Angels of Hope was born.

“Angels of Hope relies solely on money raised from events and the generosity of the public who make donations. Without such generosity we would be unable to continue raising awareness or fund research. Without research we cannot hope to find early detection methods or better treatments for ovarian cancer patients. We greatly appreciate Almac’s donation.”