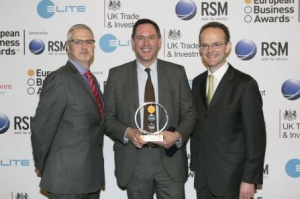 Craigavon , UK – 27 May 2015 Almac Group was last night named the winner of ‘The UKTI Award for Innovation’ in the final of this year’s European Business Awards, sponsored by RSM, at an exclusive awards ceremony held in London attended by prominent businesses leaders, European ambassadors and political representatives from the EU.The win celebrates the end of a yearlong journey for Almac that began in spring 2014 when the European Business Awards engaged with over 24,000 businesses at the entry stage of the competition. After being named one of 709 National Champions from 33 countries in November, the company took part in the public vote, which generated 174,000 votes, a record-breaking year.

Almac was then announced as one of the 110 Ruban d’Honneur finalists in February and underwent a final face-to-face presentation with a judging panel. Last night they were crowned one of the 11 category winners in front of the best businesses in Europe.

Michael Sloan, VP Business Development, Almac Diagnostic Services, commented on collecting the award: “We are absolutely thrilled to be chosen as one of the top 11 businesses in Europe. This is a major accolade for us as The European Business Awards programme is widely recognised as one of the most challenging competitions in Europe presided over by an esteemed panel of judges.”

Adrian Tripp, CEO of the European Business Awards said: “Our winners are shaping the face of European business and ensuring Europe’s position as a leading player on the global business stage. Huge congratulations to Almac for their success.”

Jean Stephens, CEO of RSM, the 7th largest network of independent audit, tax and advisory firms, said: “The extraordinary entrepreneurialism, innovation and business success demonstrated by this year’s winners shows how much can be achieved in challenging market conditions. They are all a credit to their country and we wish them every success for the future.”

In the 2014/15 competition, all EU member markets were represented plus Turkey, Norway, Switzerland, Serbia, Croatia and the Former Yugoslav Republic of Macedonia, Their combined revenue exceeded €1.5 trillion, and together they generated profits of over 60 billion Euros and employ over 2.5 million people.