In a dual announcement Almac Discovery Ltd and Queen’s University Belfast (QUB) have revealed the launch of a formal working partnership between Almac and the Center for Cancer Research and Cell Biology (CCRCB) at Queen’s, and a significant milestone in the development of a ground breaking new cancer drug ALM201. Taken together, the two projects represent a total investment of £13 million, which includes some financial support from Invest Northern Ireland, part funded by the European Regional Development Fund. 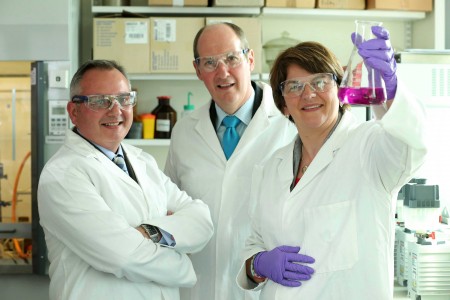 ALM201 is a drug candidate derived from a natural protein originally discovered by a Queen’s School of Pharmacy research team led by Professor Tracy Robson, and developed by Almac Discovery Ltd in Craigavon in collaboration with Professor Robson. It is an anti-angiogenic drug which works by preventing the growth of new blood vessels thereby inhibiting tumour growth. However ALM201, unlike the majority of other anti-angiogenic therapies on the market, works by an entirely new mechanism and hence has the potential to treat a wider range of patients than currently possible including those resistant to existing therapies.

With preclinical studies successfully completed the drug has reached a significant milestone as Phase 1 clinical trials are scheduled to begin in early 2014. The three year trial will be led by Dr. Richard Wilson, Director of the Northern Ireland Clinical Trials Unit at Queen’s and managed by Almac Discovery and will be run from Belfast and two other UK based clinical trial Centers.

Today also marked the formal launch of the Almac/CCRCB joint Drug Discovery Partnership and the announcement of Professor Tim Harrison as the inaugural McClay Chair of Medicinal Chemistry who will head up the collaborative programme.

Alan Armstrong, CEO of the Almac Group explains; “Almac and Queen’s have already demonstrated through the creation and development of ALM201 how valuable and productive such a world class partnership between academia and industry can be. By integrating academic and clinical researchers with experienced industrial scientists we have the means to accelerate cancer focused drug discovery towards the ultimate goal of improving patient care. A team of 17 Almac scientists will be seconded to Queen’s for three years and the combined unit will create a coordinated drug discovery and development pipeline. Resultant products will then continue their development journey with other appropriate partners towards patient-enriched trials and ultimately commercial production. This single-location integrated approach puts the initiative at a distinct advantage and reflects Northern Ireland’s aim to compete more effectively as a modern knowledge based economy.”

Professor James McElnay, Acting President and Vice-Chancellor of Queen’s, added: “Queen’s and Almac are recognised internationally as being leading innovators in the world of drug discovery and cancer research.  Today’s announcement, therefore, heralds an important new era for patients in Northern Ireland and beyond. Not only is our newest collaboration set to deliver significant future economic benefits for Northern Ireland, it will also result in an increase in the development of potential new therapeutic approaches for patients, and accelerate the process in which treatments move from the lab bench to bedside.”

Making the announcement, Enterprise Minister, Arlene Foster said, “Almac is a highly respected and successful drug development company focusing on innovative cancer treatments that have global potential. This significant investment in research and development will enhance collaboration between academia and industry.  This will ensure the investment is maximised, that research is effectively commercialised and that ultimately, enhanced treatment solutions are made available to cancer patients.”

To learn more about Almac please visit www.almacgroup.com, e-mail [email protected] or follow us on Twitter at https://twitter.com/AlmacGroup.